Our daily life in the Orient 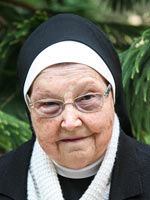 « Our convent of St. Charles sisters was established in Jerusalem in 1886. At that time, the Holy Land was ruled by the Ottomans. The population suffered from various grievances and challenges, the sisters had to fight with. The health system was broken. Therefore, the Latin patriarch instructed that every religious institution has to set up a polyclinic in order to take primary care of children and the elderly - especially under the immediate threats of epidemics. [...]
During the colder rainy season, the situation often became extremely critical, because there were heating facilities not until the 1960s. Although Israel holds a leading position in terms of technological and material progress among Middle East countries, the financial situation of religious organisations comparable to ours is still problematic [...]
So what does all these difficulties and challenges mean for the social lifes, we are dealing with? How could we bear the constantly re-emerging political unrest and religious tensions?
We are not afraid to take risks and engage with courage and perseverance, so that our Christian values of love, tolerance and respect can flourish. We remember the specific profession each of us has received from God. We admit our own mistakes and failure, but recognise that it is our duty to give a living and convincing testimony of faith as well. That is, all in all, our modest contribution to a peaceful future. »